More about this update – watch in this video review.

2000 dynamic After Effects transitions for any video projects! Make your video visually
interesting and amazing quickly, conveniently and effortlessly! Slideshow, trailer,
promo, music clip, broadcast, movie, documentary film or presentation – every your
project will be far more fascinating, dizzying, and professional!
Lift your videos to the next level! Add to your video editing tools these super cool
Target-Zoom and Pan transitions!

How does it work

Handy Seamless Transitions have been carefully crafted so that they are super-easy to
use for all skill levels – simply place a transition-layer at the junction of the two scenes
and everything is ready to roll.
All transitions work without the need to do Pre-compose or Media Placeholders.
Transformed any content, that is placed underneath the transition layer.
Check it out in this short How-to-Use video! 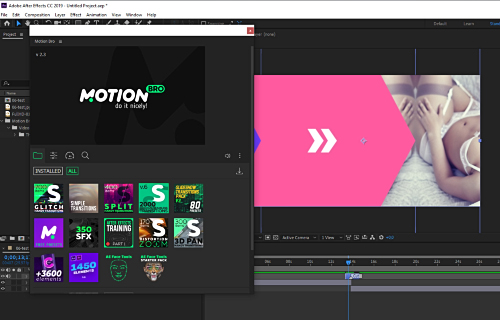 What is included in the project

The project includes two items, for different methods of using it – with a Motion Bro
extension.

• 2000 dynamic transitions
• Supported any resolution up to 4K – above 4K is also possible for most transitions
• Supported any aspect ratio regardless of orientation – portrait or landscape
• Without media hodlers (adjustment layers system)
• Animation speed control in real time
• Ability to move a Zoom and Spin Target
• Ability to change direction of the slide, for transitions from SIMPLE pack
• Ability to use in Premiere Pro (via the Dynamic Link). Tutorial
• Does not require advanced skills in After Effects
• Free Demo Presets
• Free Sound FX Pack
• Music is not included.

Update 4.0 (01-12-2017)
+ Adapting all HST-transition for a new extension - Motion Bro
+ Added a new category of pan transitions: Simple. For these transitions have ability to manually change the direction of slide
+ Added new categories of transitions: Glitch, Flares, Film

Rodents by AM Crested Porcupine
тут